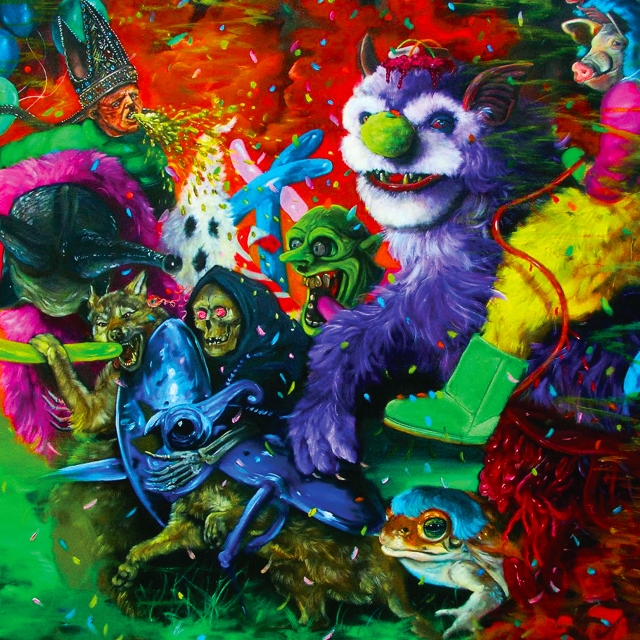 Gareth Liddiard has been the most important Australian songwriter of the last 15 years, certainly within the world of chart-swerving guitar music. His strengths lie in literary lyrical astuteness, willingness to explore the sprawl and corners of his songs and the raw, unhinged and visceral quality of his performances. The Drones always seemed like the cross between Neil Young, Dirty Three and Nick Cave & The Bad Seeds but by the time they hit Feelin Kinda Free (2016) their restless inventiveness had branched out into new experimental territory, the precursor to Tropical Fuck Storm.

With new members around Liddiard and Fiona Kitschin, Tropical Fuck Storm have thrown away any rule book they may have had and taken an ‘anything goes’ approach, embracing dark electronic undercurrents, heavy funk and a wider palette of voices. Liddiard is verbose and incoherently eloquent as ever, this time railing against popular culture, the rise of intelligent machines, the despair of modern politics and the fear and paranoia of modern living with an apocalyptic backdrop.

‘You Let My Tyres Down’ is pure Drones with it’s quiet/loud dynamic and beautifully weary chorus. ‘Shellfsh Toxin’ is an instrumental comprised of queasy unease, the title track is optimism short-lived, ‘Two Afternoons’ is a coruscating death disco and ‘Rubber Bullies’ suggests Liddiard has been immersing himself in Saharan desert rock. Tropical Fuck Storm are a glorious detour into deconstructed rock music, reflective of societal malaise and unafraid to tell it like it is. Qualities desperately needed in the current musical climate.

🎶 #nowplaying Jonnine – Super Natural (2019) Solo EP from Jonnine Standish of HTRK
This is superb! #nowplaying We’re New Again – A Re-imagining by Makaya McCraven To mark the tenth anniversary of the release of I’m New Here, the thirteenth - and last - studio album from the legendary US musician, poet and author Gil Scott-Heron, XL Recordings release a unique reinterpretation of the album by acclaimed US jazz musician Makaya McCraven. Titled We’re New Again, the album will be released on 7th February 2020; exactly a decade after the release of Scott-Heron’s original Richard Russell-produced recording. It’s set to follow in the footsteps of Jamie xx’s highly acclaimed 2011 remix album We’re New Here and will be McCraven’s first release of 2020, following the huge global acclaim heaped upon his 2018 album Universal Beings. One of the most vital new voices in modern jazz, McCraven is described by the New York Times as a "Chicago-based drummer, producer and beat maker, [who] has quietly become one of the best arguments for jazz’s vitality"
Portishead – Portishead (1997) #vinyl #triphop #recordcollector
Wonderful rainy morning music from Mike Nock and his 1981 album Ondas. New Zealand-born pianist Mike Nock made significant creative contributions to new jazz with the electric group the Fourth Way at the end of the 1960s. Ondas, his sole ECM date, recorded in 1981, finds him leading an acoustic piano trio with an adroit bassist and a free-thinking drummer. Nock’s very open compositions leave plenty of space for each of them to shine. Eddie Gomez’s elastic bass is often a second lead voice in these pieces, and Jon Christensen’s pulses are felt as a succession of waves.
It’s a synth pop morning here at DS HQ with Heaven 17’s 2nd album The Luxury Gap. My first time listening to this too!
Q – March 2020 @supergrasshq