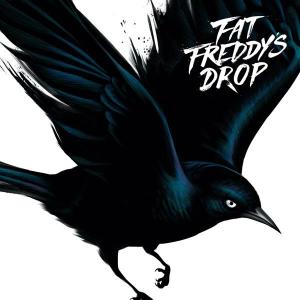 Fat Freddy’s Drop don’t rush things with this only their third full length album in 14 years (excluding a pair of live albums). That steady approach is also one of the defining aspects of their sound and their propensity for slowly evolving electronic, soul, dub and funk workouts that equally nurture listener’s limbs and ears. Blackbird is without doubt their most cohesive and rewarding work to date.

The general mood of Blackbird is a darker one. On the surface all the elements of what makes them so unique are present and utilised but they’ve managed to economise the ebb and flow of the new songs and create a sprawling yet finely tuned record. Opener Blackbird uses its near 10 minutes to blend funk inflected soul with a swinging dub bass line and reverb drenched horn section, sounding very similar to compatriots The Black Seeds and taking them closer to the dance floor than they have for a while. They also approach a pop format in the first official single Clean the House which captures a pulsing, vaguely Motown groove allowing the other instruments, in particular the guitar, to paint some wonderful melodic stabs and phrasings. Bones lightens the album considerably with its breezy Spearhead-ish vibe and feels comparatively inconsequential before the squelchy electronica of Soldier heads back to darker dub territory. The last three tracks all exceed seven minutes with Never Moving in particular mixing up a swirling electro-funk quick-step that finds them stretching out further into EDM.

Blackbird is a defining example of rhythm-based musical cross pollination that sounds perfectly natural in the hands of Fat Freddy’s Drop; furthering their exploration of structure, nuance and sonic texture with glorious futuristic results.