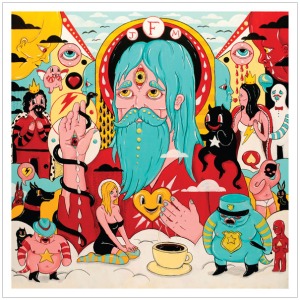 Many will know Josh Tillman as the ex drummer for Fleet Foxes but for those who have followed his solo work over seven albums of stark folk music will know him better as a fine purveyor of intimate and emotional songwriting in the vein of Will Oldham, Vic Chesnutt and Damien Jurado. Now Tillman has taken lead from Oldham (Bonnie ‘Prince’ Billy) and taken on the moniker Father John Misty, changed tack with his music and as a result delivered an album brimming with humour, melodies and bristling with personality.

The first single Hollywood Forever Cemetery Sings makes a clear statement about Tillman’s change in style. This is a shift from introspection to maximalist and outward looking music. The drums are splashy and reverb-laden with Tillman singing boldly and full chested. His voice works in the same way as those of his fellow travelers in Fleet Foxes with that mix of folk, sweet indie and americana, with a choral quality that always sounds like he is singing in a large empty church, the notes reaching for the rafters.

The bountiful melodic richness on the album is one of the best things about it with the 70s West Coast songwriter boom playing a big part in shaping the way Tillman approaches his vocals. Well You Can Do It Without Me has a distinct Harry Nilsson vibe complete with whistling and the obvious influence of Nilsson pops up at numerous points throughout the record.

Nancy From Now On bears a striking resemblance to the recently feted John Grant, another who is capable of delivering wicked lines like ‘Pour me another drink and punch me in the face, you can call me Nancy’. That streak of dark wit helps Fear Fun avoid becoming too serious and as seen by his performance of Only Son Of The Ladiesman on Letterman, Father John Misty has allowed Tillman to embrace and celebrate sly humour in his songwriting that was previously absent or well hidden.

Listening to Fear Fun also brings to mind the work of Grant Lee Phillips, another singer capable of gorgeous falsetto melodies that complement the grainier lower levels of his register which Tillman utilises on the americana shuffle of I’m Writing A Novel. Both singers also share an obvious love for folk, gospel and country music without settling into cliched rehashes of either genre.

The production and musical contribution from Laurel Canyon ‘man of the moment’ Jonathan Wilson is crucial in the success and downright fun of the album. He has given Tillman a wonderful warm sound that harks back to classic analog recordings from the 70s, judicially using piano, guitar, violin and percussion only where it is needed. He has allowed space in the songs for all the notes to hang in the air and interact with very little clutter or over production.

it will be interesting to see if this Tillman sees this new direction as a permanent vehicle for his music or if he will continue to release stark, folk styled songs under his own name. Either way the listener is rewarded handsomely with Father John Misty’s Fear Fun, an album of joyful, celebratory sounding music with hooks aplenty and a clever thread of dark humour woven into it.