“Wow & Flutter was recorded by me in the back room of my house in Marrickville, on a TASCAM 4-track cassette recorder, in between dogs barking and babies crying. I had to buy cassettes online from Melbourne and bought and sold several 4-track machines until I found the right one. Tim Kevin, who recorded and mixed the first album, recorded a few extra bits and pieces and mixed it. The finished album is eight songs with a couple of different vibes.””There’s the more traditional singer-songwriter style of the first couple of tracks, ‘Promised Shoreline’ – a story about a couple whose faith is tested in life and death, and ‘The Spirit of a Small Town’ – a true account of the dark goings-on of my mother’s family and her birthplace in the south of Chile. But then the album settles into its second phase. The hypnotic, trance-inducing repetition of ‘The Bird’, ‘If You Sail Out’, ‘Wasted Habit’ and ‘Yuppie, Junkie, Athlete’. The album closes with ‘The Only’ – an epic checklist of modern malaises, combining the album’s two worlds into six minutes of 60s singer-songwriter-inspired folk-drone. Yeah, I know.””I hope you like Wow & Flutter. It took me a while but I think it’s worth it.” x BG

To celebrate the release of the new album he’s also released a video clip for the new single ‘No One Can Tell You You’re Wrong’, of which he says:

“It takes a lot of courage to follow a dream. To disown everything around you and make your way through life doing what you really want to do. You might have to step on some necks. People and relationships will fall (or will be felled) by the side of the road. This song is about and for those who have that conviction and ambition. I don’t.”

“The video was made not long before my cat Nina passed away. It looks like it was an homage to her, and I guess it now kinda is, especially as she looks towards the setting sun in the final scene. The footage I got of her was just meant to be practice for the app I’m using to film, but upon revisiting it, I thought the shots really captured just how gentle and beautiful she was, so I kept it.”

“The other part of the split frame is just me driving down New Canterbury Rd from Petersham to Dulwich Hill. If you look closely early on, I managed to get one of the street lights just as it starts to flicker on. I was pretty happy with that.”
BG

As a primitive Mo Tucker-indebted percussion joins the procession, there’s a clear nod to the Velvet Underground and their droning pop nuggets. While Glass’ first single ‘Wasted Habit‘ was a frantic, frayed-nerve dispatch, ‘If You Sail Out‘ is all about a controlled and dreamy mood amid questions of context and perspective on one’s life.

Sydney songwriter Buddy Glass (Bruno from Peabody) is back with a brand new single and video, his first since he released his self-titled solo album in 2014. ‘Wasted Habit’ comes from his forthcoming new album Wow & Flutter, due out September 4th on Glass Half Empty Records.

‘Wasted Habit’ is a hard-strummed acoustic and densely fuzzed out electric shakedown. There’s desperation and anxiety in the frantic twitch and thrash of its sound, like clinging on for dear life as you hurtle towards the inevitable.

“I recorded the vast majority of the album on 4-track cassette in the back room of my house in Marrickville, in between dogs barking and babies crying – but this track was done on a digital 8-track machine I’ve had for over 20 years.”

“It’s a song about knowing the outcome of a situation before it happens, but nothing you try to say or do stops you from taking the steps necessary to fulfill that outcome, even when that means a raw deal for everyone involved. It’s like being in a car crash but also witnessing it from the outside. It’s essentially about determinism over free will. The video clip features me flailing and dancing around in a cat mask in a David Lynch-style room. My friend said it was like Ian Curtis trying to dance like Peter Garrett. I hope that’s accurate.” 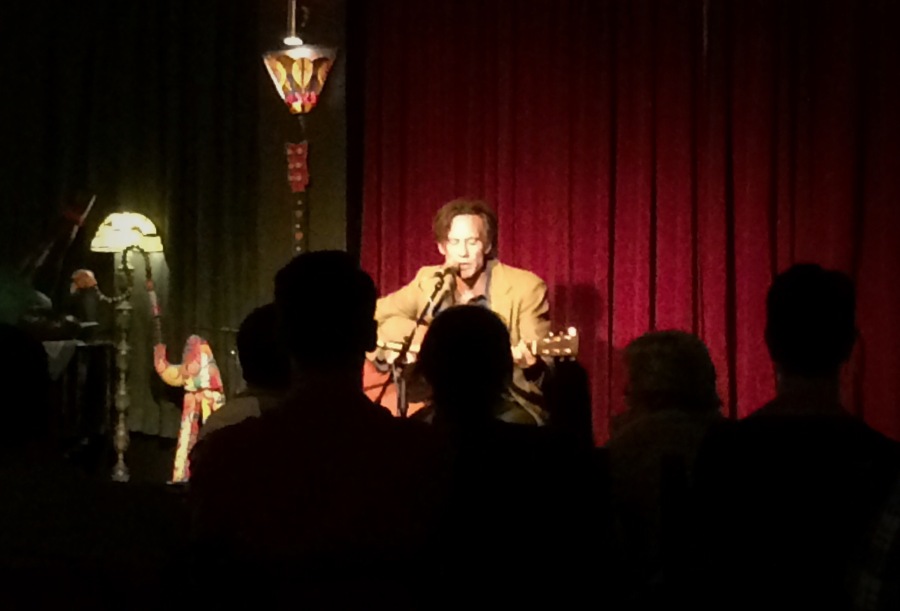 Buddy Glass is the stage name for Bruno Brayovic (Peabody) in his solo guise. With a recently released debut under his belt he took the audience on a journey through those songs, stripped back to just his voice and acoustic guitar. There were flashes of the wit and venom often seen with Peabody but for the most part Glass focused on the songs – which were raw in subject matter and obviously born from a deeply tumultuous end to a relationship. There was little hiding behind obtuse metaphors as Glass laid the experience out with poetic candour and in particular showed his strong and melodic vocal range. The Spinning Titanic stood out with its State Trooper vibe as did the grand balladry of Just Me & The Dark.

Jamie Hutchings was celebrating 20 years in the music industry, a milestone for any musician but especially one who has constantly challenged himself – from the dark and emotive rock of Bluebottle Kiss through the more intimate solo albums and onto his current work in Infinity Broke. Hutchings started right at the beginning with a track from BBK’s Higher Up The Firetrails and proceeded chronologically through the numerous highlights across two decades. The vibe in the room was warm, interactive and celebratory as acoustic versions of Autumn Comes Too Soon, the exquisite Girl Genius, Everything Begins And Ends At Exactly The Right Time, Gangsterland, Father’s Hands, Ounce Of  Your Cruelty, Beautifully Tragic and many more were played. Hutchings chatted more than he probably ever has on stage, giving an insight into the genesis and inspiration of the songs and experiences that surrounded them with self-deprecating humour, dedications and some healthy sarcasm. That personal interaction was crucial to the success of the evening and connected Hutchings to his audience who showed genuine love and passion for his body of music.