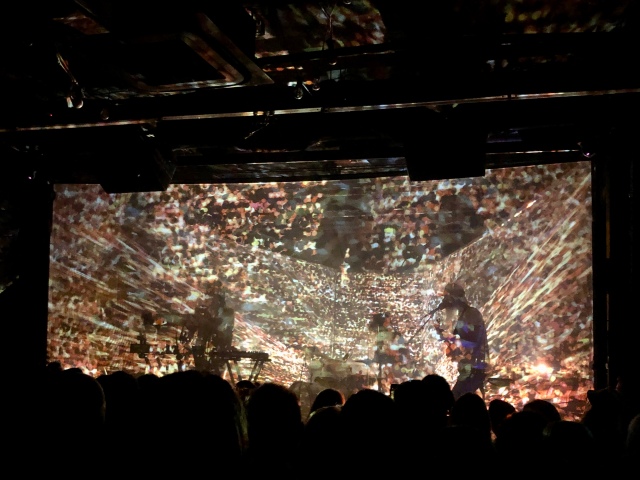 The evolution of Moon Duo has been a slow and steady one over the last decade. Originally starting as a duo of Wooden Shjips guitarist Ripley Johnson and Sanae Yamada, the pair have retained their minimal aesthetic and core personnel but expanded their live performance to include a drummer and most recently, a stunning light show, by Manchester-based visual projection artist Emmanuel Biard, comprised of projections onto transparent material surrounding the band on three sides, creating a 3D prismatic effect.

After a DJ set from Angus Andrews of Liars that travelled through all kinds of psychedelic dimensions before curtains parted and the band emerged in their triangular realm, silhouettes magnified large above the audience’s heads. Any Moon Duo show is a journey that doesn’t necessarily have peaks, instead there are sonic waves, carrying the crowd on stratospheric journeys through thin atmosphere, twinkling synth lines and winding, searching guitar filigrees or dragging them down into subterranean head trips to the centre of the earth. The Krautrock drive and relentless rhythms were like a superhighway – sleek and endless, the motorik bass and melodies of Yamada the perfect balanced foil to Johnson’s more traditional psych rock soloing – heavy on effects and open-ended explorations of the outer limits.

Tracks from most of their albums peppered the set and they finished off with their recent cover of Alan Vega’s ‘Jukebox Babe’, a perfect homage to one of their strongest influences. The combination of the visuals and the consistent and cohesive adherence to their musical parameters made the set a wholly immersive and transportive experience for the audience and no doubt the band as well.