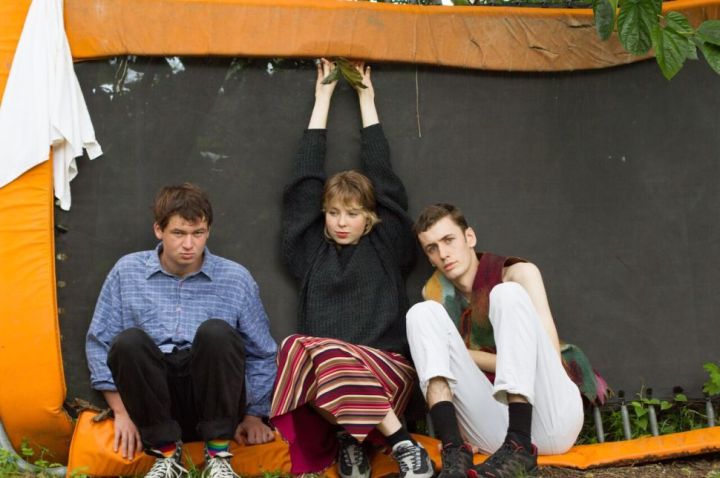 Brisbane trio The Goon Sax return with their second album and as Louis Forster and Riley Jones explain to Chris Familton, the desire to document their thoughts and experiences through an open musical relationship remains the driving ethos of the band.

They were still teenagers negotiating the twin worlds of school life and being in a band when they released their debut album Up To Anything and now, facing the challenge of adulthood and the new responsibilities that come with it, The Goon Sax have found some different angles from which to write about familiar themes on its followup We’re Not Talking.

“I think growing up was definitely a big theme,” says singer/guitarist Forster. “We were writing more about love than we’d written about before. On the first record we were writing about that from an outside perspective, as a foreign concept. This time it was closer in that sense,” he reveals. “It was also about finishing school and worrying about what we were doing everyday, which we hadn’t had to do for 18 years.”

The group recorded the album down in Melbourne at Super Melody World and though they have mixed feelings about the experience, both Jones and Forster agree that it yielded positive results. “The recording process was really different because we worked with producers who had an idea of what we should sound like and we had a different idea, so the album is like both sides pulling and fighting for some middle ground which definitely makes it interesting,” reflects Jones. Forster agrees, adding, “we started writing as soon as we finished recording the first album, from 2015. It’s coming from the same place as the first record. I think there’s tension in every aspect of the record. It feels like it has so much tension and energy, that feels like it’s on the verge of falling apart or exploding which is a good thing. It didn’t seem like a good thing at the time but maybe it is now,” he says, with the benefit of hindsight.

One feature of the album is the increased democratisation of the musical relationship between the three of them. Alongside James Harrison, all members contribute lead vocals to the new album. “We definitely sing the songs that we write and then the others chime in. We recently made a rule that anyone can chime in whenever they like and so far that has worked well,” explains Jones.

That willingness to try new things on We’re Not Talking extended to the use of new instrumentation  such as strings, piano and more across its 30 minute playing time. “We wanted to experiment with drum machines a bit and have some horns and things.” says Forster. “We all wanted to sing more on each other songs. There are more group vocals and we were all having more influence on each others songs, both with the singing and the ideas we were putting forward. There are bits of Riley and James on all my songs and vice versa which wasn’t maybe there before that. It wasn’t necessarily a conscious thing but we did it at the time and it felt good.”

One common element that the newer songs share with the first album is the streak of melancholy and self-doubt that permeates their music. Is that a representative of their personalities or just the mood and tone of how their creativity is naturally expressed?

“I think to some degree it is part of our personalities but we definitely wrote about things that were difficult and that bummed us out at the time and writing about them made us feel good again. Sad music is made for a reason and maybe it’s to repurpose something you’ve gone through, “ ponders Forster. “It’s important for us to make music that feels necessary, not just for the sake of it. You need to feel like you have to do it. I like the absurdity of putting sad lyrics to happier sounding music, it just makes me laugh.” Jones has a similar take that also reflects the way she enjoys listening to music. “I like it when you can be nostalgic about those kinds of feelings and remember through the music how strongly you felt about something.”