I doubt whether many alternative rock fans in the early 90s would have envisaged that the singers of Kyuss and The Hard-Ons would be doing a small-sized solo acoustic show in the year 2018. Noise and electricity have always been crucial elements of John Garcia and Blackie’s calling card sounds so it was both a revelation and a relief that they both pulled it off so well. 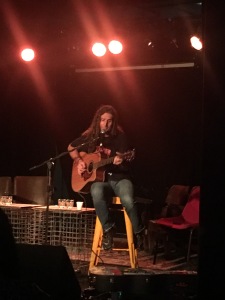 Peter Black has been playing solo shows for years now and it’s quite a different sound to his band outings. Predominately made up of finger-picked acoustic guitar and a high register voice, his set was low-key yet quite engaging once one became used to his style. His melodies danced and twisted into fascinating shapes, never settling on any one note for more than a millisecond. Both Neutral Milk Hotel and Graeme Jefferies’ The Cakekitchen came to mind as Black dug into his four-album catalogue for a very good opening set.

With the stage set and various bottles of spirits and an ice bucket in place, John Garcia and guitarist Ehren Groban set about creating an atmosphere that was both intimate and intense. There was plenty of chat from both singer and guitarist with Garcia thanking the audience repeatedly and talking about the songs and their transition from electric to acoustic forms and admissions of pre-gig nerves. The second he opened his voice to sing you knew you were in the presence of one of the great rock vocalists. He possesses a power and control that Kyuss fans already knew he had but shorn of the electric sludge and sonic density of that music his singing was even more impressive. From a sweet whisper to gritted teeth and searing howls his range and precision was visceral and perfectly executed.

From solo material to the iconic Kyuss songs such as Green Machine, Space Cadet and El Rodeo (complete with thunderous audience sing-a-long) and Hermano’s Kentucky he showed that he wasn’t just about the ‘hits’ and then filler. The whole set was strong right across the board. Credit must also go to Groban who was never weighed down by the history of Kyuss. He nailed the rhythmic intensity of the songs and added impressive filigrees of classical, Spanish and blues guitar with not much more than a loop pedal. Garcia complemented the music with shakers and tambourine that, in his hands, sounded like a malevolent rattlesnake. The passion for the songs the brotherly camaraderie and the relief and satisfaction of a job exceedingly well done were the rewarding features of an excellent night of heavy acoustic rock.