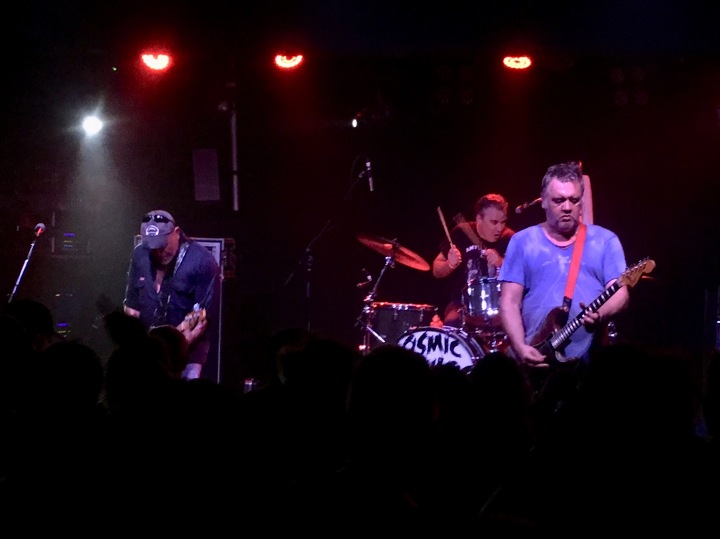 The top echelon may be uninspiring but down at ground level guitar rock is still brimming with passion, humour and free-spirited energy A sold out venue and mosh-pit ready crowd greeted young upstarts The Chats. Joining the Cosmic Psychos tour from the Sunshine Coast they were like a mini version of the headliners. The same relentless, urgent, pummel and strum that is part AC/DC, Cosmics and Straight Arrows complete with mullet, wraparound shades, a bucket hat and goofy facial expressions. There’s a cartoonish quality to their sound but the simple, unfettered documentation of their lives, the impression that they don’t take things too seriously and their energetic delivery made for an entertaining set. They call themselves shed rock; more like larrikin rock.

Birdcloud hail from Nashville TN and if anyone had concerns that two girls with a ukulele and acoustic guitar would struggle between two slabs of hard rock then they were quickly proven wrong. Jasmine Kaset and Makenzie Green came with sass and attitude, calling out the sound person for a shitty mix at the start of their set. Once they got rolling they showcased their Singles album with songs like Fuck You Cop, Vodkasodaburg and Washin’ My Big Ol’ Pussy. Things descended into hilarious chaos with The Chats joining them for a song, a flashed nipple, and the removal of pants for a strap-on harmonica solo. Part cabaret, 100% rock ’n’ roll.

Cosmic Psychos were onstage, ready to kick into things before the roadies had even finished soundchecking, such is their casual approach. Starting with the none-too-subtle double shot of Pub and Nice Day To Go To The Pub, the kids, young and old, set about creating a mosh-pit of careening bodies, cascading sweat and alcoholic grins. Sure there’s colloquial humour aplenty but the Cosmics have a well-honed sound with Ross Knight’s strangled bark and yell and his buzzsaw bass, Dean Muller’s precise and inventive drumming that looks way simpler than it is, and the well-rounded specimen that is John McKeering and his spiralling wah guitar solos and slashing chords. It’s simple music but delivered with primal muscle and a deft touch. A masterful blend of  The Stooges, Ramones and Motorhead. Dead Roo, Fuckwit City, Bitter Not Better, Lost Cause and Feeling Average were all standouts before the support acts stormed the stage and brought it all home with the glorious sing-along of David Lee Roth. After 34 years Cosmic Psychos are an undeniable rite of passage for Australian youth at the crossroads of punk, metal and hard rock.