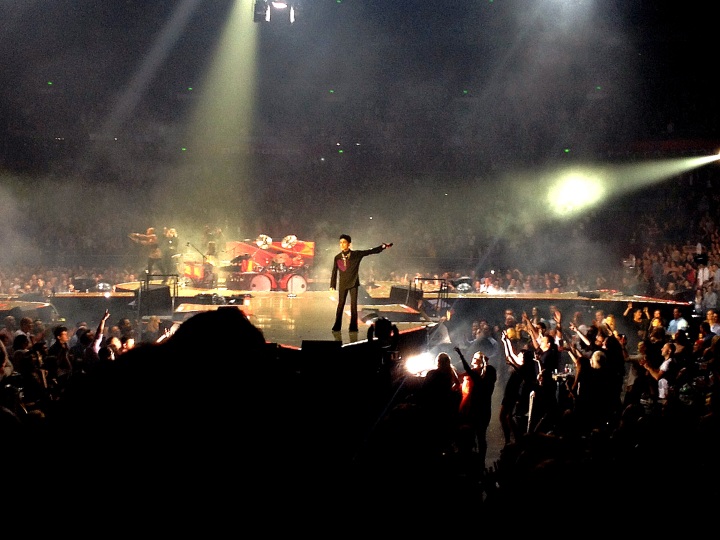 Artists get hyped beyond belief in this day and age so when a true legend whose discography spans thirty two years announces a rare Australian tour, his diehard fans and the wider public quite rightly get excited. Prince’s aversion to the media and interviews has given him an aura of mystique, much the same way as Dylan and over his career he has used it to great effect to construct an otherworldly and fantastical public persona that fuels the passion and curiosity of his fans.

Arriving at Allphones Arena hit home that this really was an ‘event’, quite different to your standard rock concert. There was purple everywhere – purple hair, dresses, shirts and make-up and it must be said, not the most flattering colour to base your outfit around. Nonetheless the extent to which people had embraced Prince’s visit was testament to his iconic status. Weaving through the throngs of merchandise seekers it was baffling how an artist who invests so much in his image could churn out such mediocre t-shirts and random items like tambourines. Again though, the fans were lapping it all up.

The promoters had repeatedly told people prior to the show to ensure they were seated by 8pm so thirty minutes later when murmurs of impatience were beginning to spread through the arena the lights suddenly dimmed and the iconic Prince symbol appeared on the screens amid lightening and thunder. It took a while but finally acoustic guitarist Andy McKee rose from beneath the stage plucking the strains of Purple Rain. It was a soft start to the evening but it worked well, building the anticipation for the arrival of the man; and there he was all of a sudden, Prince, resplendent in gold and launching into the song of the same name before segueing into Jam of the Year from Emancipation. The crowd quite rightly went apeshit, everyone on their feet, arms in the air and reveling in the fact that they were in the presence of the artist with a damn funky band behind him.

The stage was in a 360 degree configuration in the shape of his infamous symbol which meant that most of the crowd had a range of views of Prince as he roamed the stage with his backing singers and dancers also venturing to all corners. The first big hit came with Let’s Go Crazy with those familiar opening strains of ‘dearly beloved…’ it really brought the funk for the first time and showed the difference between much of his older material and the simplicity that made those songs work so well. Unfortunately like many of the songs it was a truncated version, possibly due to a malfunctioning guitar pedal and while it was frustrating to only get parts of songs the upside was we heard more of them. Let’s Go Crazy morphed brilliantly into Delirious before taking things up another level with the party anthem 1999 and then getting into a darker sensual zone with Little Red Corvette. At this point the band, audience and Prince himself seemed well and truly settled in for the party.

Though the show was heavily populated with the hits there were also some interesting diversions into lesser known tracks like Take Me With U from Purple Rain and Forever In My Life from Sign O The Times as well as the reclaiming of hit songs he’d written for others like Mountain and Dance Electric (Andre Cymone), Love Thy Will Be Done (Martika) and a snippet of Nasty Girl (Vanity 6). The highlights of these covers of covers was his soul wrenching take on Nothing Compares 2 U made famous by Sinead O’Connor. He took it to another more visceral place and the co-vocal from singer Olivia Warfield was magnificent. There was also a wonderful tribute of sorts to Michael Jackson with Don’t Stop Til You Get Enough played during an organised stage invasion by the people in the expensive seats next to the stage.

Though Prince with a killer band behind him is an amazing thing, the best portion of the show came with him solo at a synth disguised as a piano, working his way (and the crowd ) through a medley that included When Doves Cry, Hot Thing, a criminally short part of Sign O The Times and The Most Beautiful Girl in the World. He reduced the songs to minimal electro funk, showcasing just how experimental an artist he can be when he sets his mind to it.

From there on the hits kept coming with the sexual funk of Kiss rounding out the main set. Prince re-emerged to play his signature tune Purple Rain but it was there that some of the energy that built up through the night began to wane. The song was stretched out to a slow moving epic that would have worked if he had taken it to real heights with some of his interstellar guitar playing but it never went there, instead he relied on the audience to endlessly sing the central melody of the song on and on and on. When he did open up on guitar it made you want to hear more with the lack of his quite brilliant guitar playing a minor disappointment of the night. Controversy brought the heart rates back up and then he was gone. But wait, was that it? For those who stayed in the darkness, in their seats for a good fifteen minutes or more there was an added bonus with the guitar heavy Peach to take the music back to its rock and rnb roots.

Prince delivered in every possible way, playing many of the songs people were desperate to hear, a true spectacle of lights and generally good sound, a surprisingly high level of banter and audience interaction (though did we need to be constantly reminded we live in Sydney?) and stellar musicianship from all on stage. This was one of those increasingly rare large scale music events that genuinely worked for both casual and ardent fans.