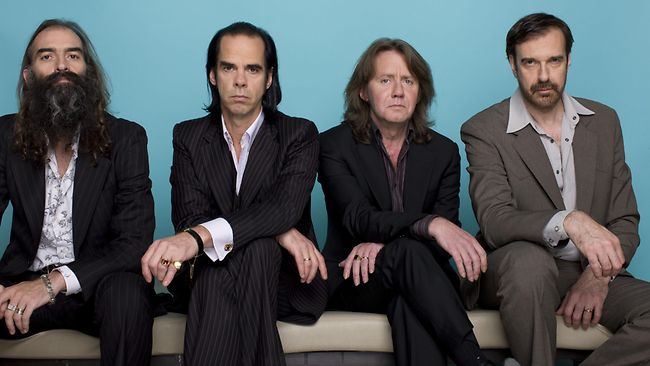 When Nick Cave took a couple of his Bad Seeds and gave birth to Grinderman a few years ago there were suspicions that the side project would be a fleeting affair, a stroppy regression to Birthday Party-esque guttural blues and lascivious shock value. That was the sense the album, videos and artwork gave and though Cave stressed it was a project that he held in the highest regard, he couldn’t shake the notion of a brief diversion.

With album #2 proving that Messrs. Cave, Ellis, Sclavunos and Casey had both refined and expanded the Grinderman blueprint, their Australian tour, in conjunction with the Big Day Out, sold out in quick time showing that the fans were more than ready to follow the band’s vision.

In support at the Enmore was a solo Ed Kuepper – also a recent touring member of The Bad Seeds – who played an impressive set of epic guitar pieces with vocals thrown in here and there. In the venue’s open spaces his guitar sounded gargantuan and at times reminiscent of Neil Young’s widescreen sound with Crazy Horse. Not content to just create mood Kuepper also showed he has a fine handle on vocal melody with his dusty voice.

Moments before Grinderman swaggered on-stage the curtain behind the instruments dropped to reveal the true backdrop – a glittering silver-draped wall and lighting racks. Ellis, Casey and Sclavunos took their places first and eased into the opening chords of ‘Mickey Mouse and the Goodbye Man’ before the unmissable stick figure of Cave strode out with bristling intent. By the end of that first song you knew this gig was going to be special, Cave had ripped his jacket from his back, clambered onto the heads of the first row and let rip guttural screams between the unsettling chants of “he sucked her and he sucked her and he sucked her dry”. The tension they built in the verses was palpable and when they hit the chorus it was like a Krautrock glam-boogie explosion.

From there on they veered between tracks from both albums. ‘Worm Tamer’’s chorus of “for too long” was the first glimpse of the vocal role that Ellis would play alongside his myriad of other string and percussion instruments. He was the mad gypsy hatter to Cave’s hell-bound preacher and his comical high kicks and freak-out thrashing on the floor was the perfect foil to his frontman’s stage command. During ‘Evil’ he was seated facing across the stage, arms held high, screaming into the mic like he was undergoing some kind of self-exorcism.

Just as the adrenalin was in full flow mode and you thought they’d bring it down they hit the crowd with the gonzo rock of ‘Get It On’ and the pelvic thrust of ‘Heathen Child’, two songs that have different elements of sleaze at work. Of course they couldn’t sustain the intensity and showed they could work dark mood and crawling intent to the same effect. ‘When My Baby Comes’ was all swirling psych yearning while ‘Bellringer Blues’ with its almost classic rock chorus, chugged along at a perfect mid-pace later in the set.

The highlight of the show was an extended ‘Kitchenette’ with Cave at his most comical and at the same time unhinged. He took the slow grind of the album version and exploded the characters into manic technicolor by serenading sweetly into the up-close faces of the front row before unleashing banshee screams down their throats. His “tippy toe, tippy toe” line was woven and interjected throughout the song and his accompanying dance was downright hilarious. ‘Kitchenette’ summed up Cave’s twin sides of sick preacher and sombre balladeer and it was a revelation of a performance.

Returning for an encore that included the infectious ‘Palaces Of Montezuma’, the Bad Seeds-sounding ‘Man In The Moon’ and the MC5 via Television rama-lama of ‘Love Bomb’, the band concluded with their theme tune of sorts – ‘Grinderman’. The song, with its funereal voodoo drone and haunting mood, was a perfect way to bring the last 90 minutes back to earth. In terms of live performances it’ll be impressive if anyone this year can beat the conviction and intensity that Grinderman brought to the stage. They were all that live music should be – visceral, emotional and transportive.