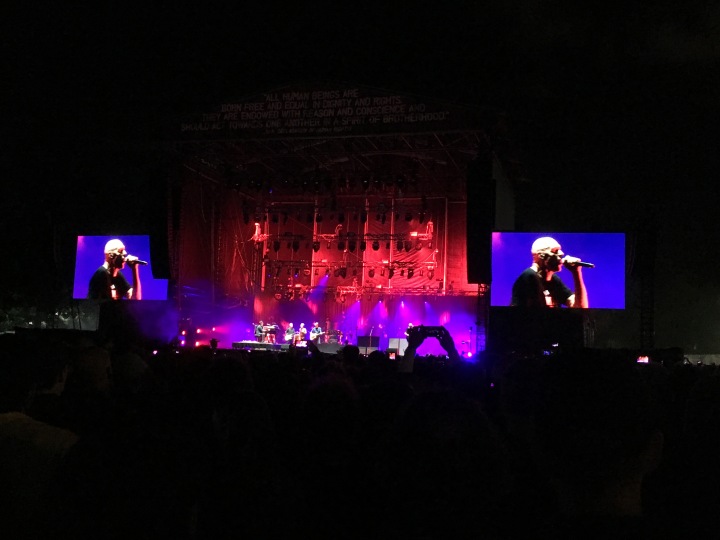 The Great Circle Tour came full circle, back to the city where it all began seven months ago with a warm-up show at Marrickville Bowling Club. Since then, Midnight Oil have conquered the world once more, returning sounding better than ever and with an enviable and overflowing back catalogue of generation-defining songs.

AB Original went down a treat as the opening act, standing tall and delivering their message of pride, culture and politics. A live drummer and keyboardist gave their sound depth and an organic feel. Hands were waved in the air as the celebratory outdoor-gig vibe kicked in, but not at the expense of conveying the importance of Briggs and Trials’ messages.

Although still with a conscience slant, John Butler Trio have a much more subtle delivery. Their breezy, rhythm-driven sound and Butler’s exceptional guitar playing worked well as the calm before the headliners’ arrival. It also may have helped to mellow out the copious tinnie-sinking punters who seemed to be intent on reliving their youthful excesses.

With slogans and messages of human and environmental rights peppering the large screens, Midnight Oil emerged on the towering stage and, as was appropriate, began with Armistice Day, Peter Garrett singing from beneath a hood. With crystalline sound they accelerated into Read About It, the screams of recognition immediate from that opening cowbell/guitar. From there it was a faultless set, balanced in its mix of the earliest of songs including Section 5 (Bus To Bondi) through to the biggest of hits – Power And The Passion, Beds Are Burning, The Dead Heart, Forgotten Years. Drummer Rob Hirst was having a ball, his muscular drumming a musical celebration of the band’s spirit in itself, joining the band front of stage mid-set for US Forces and Kosciusko. Nothing was lost with Jim Moginie restricted to a chair after his Melbourne fall, his playing a revelation of guitar and keyboards, the ingredients that added post-punk, art-rock and psych twists and turns to the band’s sound. Put Down That Weapon was reshaped as a slow-burning number and the large screens gave a fascinating insight into his and the rest of the band’s playing. Garrett is still the star of the show, though, the mad marionette dancer relishing the large stage and exploring every inch like the seasoned pro he is. He also created an intimacy with the audience with his interactions and expositions.

Sure, there were the requisite and important social and political messages, preached to the mostly converted, but the overriding message was a celebration of the music, songs that soundtracked more than one generation and still burn strong with real heart and soul.

Here’s our Spotify playlist of the songs played in the Midnight Oil set: