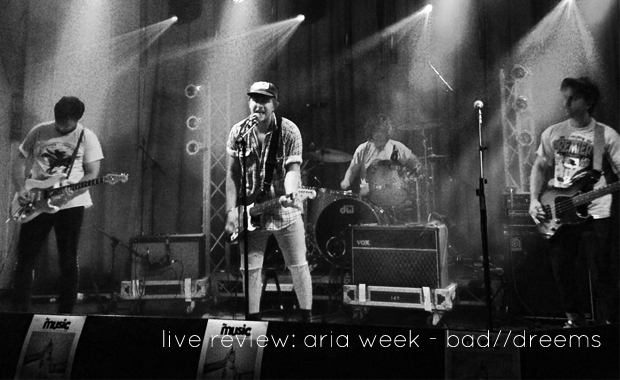 Bad//Dreems nearly didn’t make it up from Adelaide due to cancelled flights. Thankfully they did as they provided the most rock n roll and adventurous moments of the night. The four-piece showed why they have deservedly been 2013’s most exciting new proponents of melodic Australian guitar music. Songs like Caroline, Hoping For, Too Old and Chills were given a more caustic and anxious edge on-stage as singer Ben Marwe, paced and grimaced and Alex Cameron wrestled and coaxed those hookladen riffs from his guitar. Big things are expected of Bad//Dreems.

Bandito Folk were in many ways the anthesis of the openers with their delicate indie-lite guitar songs and choirboy vocals. There were shades of Augie March and Art of Fighting about them minus the dark themes and emotional connectivity those bands nailed so well. Singer Josh Tuck is the centrepiece of the band, his voice soaring in a Laurel Canyon meets Jeff Buckley fashion. The band needs a few hearts broken before they find their best songs but the base elements of a talented and marketable band are there.

She-Rex were the real misfits of the night, in a complimentary sense. Their big fun, big sound and big confident performance seemed to win over many in the audience. With a sound that combines funk, super-sized rock riffs and hip hop, all with a strange left of centre vibe to it, they set about doing everything they could to make an impression. Singer/rapper Nikkita Rast, shimmied and gyrated her way through the set, spitting out MIA styled rhymes which were superbly delivered but often lacked lyrical substance.

Sons of The East upped the indie folk quota with their banjo/guitar/keys sound, throwing in some didgeridoo, harmonica and a Lana del Rey (Summertime Sadness) cover that instigated an audience singalong. Jack Rollins’ voice is a special one, a mixture of raspy growl and sweet croon – the deal-breaker amid the fairly narrow stomp and strum modern folk sound they have.

The night of up and coming talent was rounded out by Sydney band Castlecomer. The tightest band of the night and owners of the most comprehensive sound that took in smooth pop and MOR rock, they delivered it in a fun and unpretentious manner. They were a reminder that generally the ARIAs are all about commercial recognition and achievement rather than critical acclaim (Bad//Dreems were the dark horse) and this evening was a showcase of some bands that could very well be the next generation of Australian chart toppers.