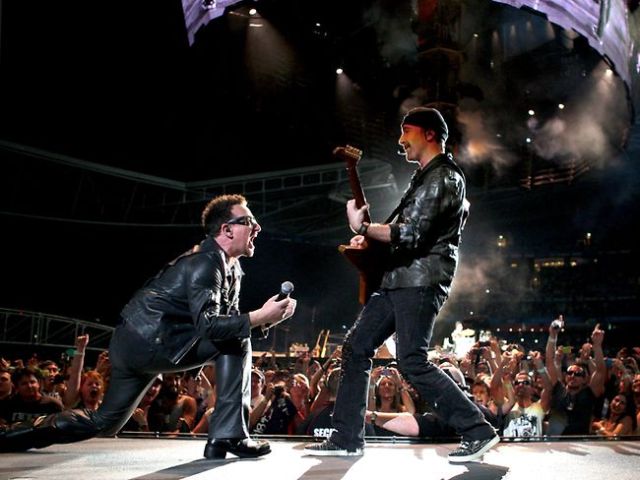 It has certainly been heavyweight season lately with the likes of Metallica, Bon Jovi and Guns n Roses coming through town but the biggest of them all is U2. Certainly they are the band with the widest appeal and even the most casual fan knows that the Irish quartet will always deliver a spectacular multimedia show.

U2 chose to bring along Jay-Z to warm up the swelling crowd and he did just that. The masses were all to willing to ‘throw their arms in the air and wave them like they didn’t care’ as Jay-Z prowled the stage barking out his tough yet pop-tinged hip-hop. The hits were all there – 99 Problems, Young Forever and Empire State of Mind – which didn’t have a great live vibe seeing as Alicia Keys was only present as a pre-recorded chorus. Yes Jay-Z got the crowd in the mood for the main act but hip-hop never sounds great in stadiums.

A fast forwarding clock counted down to the moment U2 strode out onto their latest stage construction – the 360 degree ‘space station’. As a structure it is an ugly creature from a budget sci-fi film but once the stadium lights were out the magic really started. The opening track Return Of The Stingray Guitar sounded like a band in a blender while the band strode cocksure around the ring catwalk. The lightweight intro did serve a purpose though as the crashing chords and blinding lights of Beautiful Day felt like a launching rocket in comparison.

U2 have stuck around long enough to build up a hefty catalog of songs to choose from so it was unfortunate they took the safe route. The ‘new’ songs like Elevation, Vertigo, Get On Your Boots and I’ll Go Crazy all sounded uniformly bombastic and arrogantly naive though they served to show how great U2 can be when they do write classics like Bad and I Will Follow.

The highlight of the show was surely the chiming, spiraling Where The Streets Have No Name with Edge in his finest hour of inventive and emotive playing. The lowlight on the other hand was a disappointing Sunday Bloody Sunday complete with a pointless Jay-Z guest rap.

U2 yet again excelled at putting on a visually impressive light and video show that felt both original and at times truly futuristic. Musically they were often fantastic but their failure was not choosing their strongest set of songs. Indeed you can’t please everybody but by trying to please everybody and exaggerating their already pompous stage theatrics you sense that U2’s only way forward from here may be to retreat.