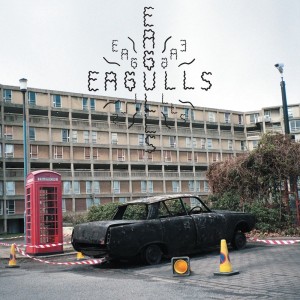 The curse of the ‘next big thing’ has been the downfall of many a band, particularly those coming out of the UK indie scene over the last few decades. The latest to get the media leg-up are a quintet from Leeds called Eagulls and the immediately refreshing aspect of the band is that they haven’t polished their rough edges to gain acceptance, instead they’ve left them raw and serrated. This is music to abrade yet it’s in no way bereft of melody and hooks.

Eagulls hit a real sweet spot with the sound of their music. They undoubtedly draw comparisons to a raft of influential bands such as Joy Division, Gang of Four, Killing Joke, The Smiths and The Cure but not in the derivative, “these guys are ripping off …” kind of way. They’ve buried the sound of their heroes just below the surface and behind choppy, effect-laden guitars, and the distraction of barking and yelping singer George Mitchell. He’s mastered the mantra-like repeated chorus on the songs ‘Tough Luck’, ‘Amber Veins’ and many others yet his finest moments come when he dials back the militant vocals. ‘Possessed’ is a real highlight of the album because of this and the Psychedelic Furs and The Horrors indebted song allows enough light and space into its dynamics to really open it up, compared to much of the album which has an insular and tension-heavy claustrophobia.

It’s all over in 40 minutes but this debut release does start to wear the listener down by the time it winds up with ‘Soulless Youth’. Barring a few exceptions, the relentless and tightly-wound mood of the album doesn’t allow the songs enough elbow room to really establish themselves outside of the immediate visceral, physical reaction they generate. There’s certainly plenty of surging post-punk rock present but across a full album the ingredients are spread too thinly.