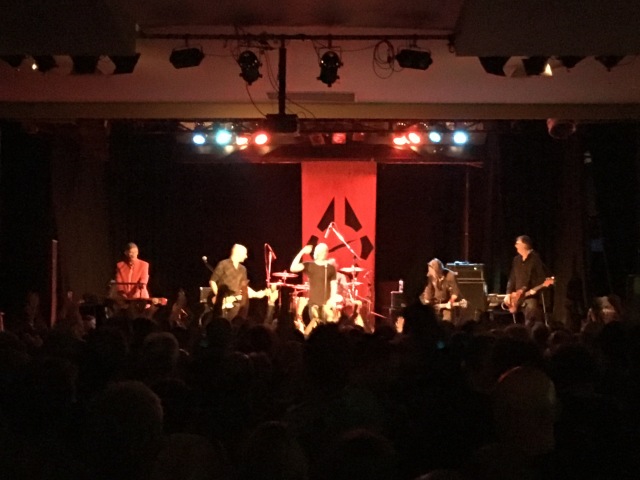 The On & Ons (including ex-members of Hoodoo Gurus and The Stems) set the scene for a night of riffs and power chords with a muscular power pop sound that brought to mind Big Star and Red Kross. They know how to mix strong melodies with rock n roll dynamics but their stage presence fell flat. Melbourne’s

Magic Bones took things up a notch with an injection of energy and youthful enthusiasm. They swapped instruments constantly which mirrored their split personality approach to their music. One minute it was ramalama garage rock, the next they were chooglin’ on some 70s rock with a twist of madcap psychedelia. Their set was too long but they made a strong impression on the Birdman fans.

Radio Birdman always suffered from comparisons to The Stooges and MC5 yet they dug a hole deep and varied enough to call it their own. The core duo of Rob Younger and Deniz Tek commanded the centre of the stage like prowling ex-communicated preachers. Younger with his Iggy meets Jagger jerks and twisted body shapes while Tek crouched over his black guitar wringing out threatening riffs and slashing call-to-arms chords. The rhythm section was a highly efficient spine allowing the limbs of Younger, Tek and the others to thrash and dance wildly. Do The Pop got an early airing while their most recent album Zeno Beach (2006) was best represented by the tumbling We’ve Come So Far (To Be Here Today). Amid the Birdman catalogue they threw in fantastic covers of Magazine’s Shot By Both Sides and an intriguing take on The Beatles’ Hey Bulldog, an example of how they were never just a gonzo proto-punk band. Their definitive anthem New Race was left until the stroke of midnight, the crowning glory of a night of nostalgic yet still fiercely alive and kicking rock ’n’ roll.