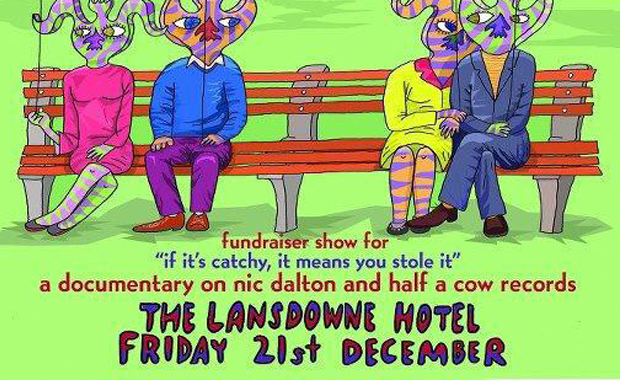 If It’s Catchy, It Means You Stole It is the title of a feature documentary on Sydney musician/independent record label boss Nic Dalton that is currently being put together by Jarrad Kennedy (director/producer) and Robert McCafferty (producer) for a 2013 release.

Nic Dalton has played in over 65 bands, most notably The Lemonheads in the early 1990’s. Dalton also co-founded independent record label Half A Cow with Miles Ferguson in 1990, which has gone on to release over 150 titles in it’s 22 year history. Interviews with key figures in the Dalton/Half A Cow story will be interwoven with animation, rare unseen footage and performances.

To raise funds for the film a gig is happening in Sydney at The Lansdowne Hotel on Friday 21st December featuring the original lineup of Swirl, Whopping Big Naughty, Tom Morgan (solo) Peter Fenton with Jason Walker and David Lane as well as Smudge’s Adam Yee spinning tunes.

If you are in Melbourne you’ll also be able to get along to a fundraiser gig at The Tote on January 25th featuring Swirl, Khancoban and many others to be announced.

You can keep up with news about the project by following their Facebook Page.

Evan Dando is returning to Australia again, this time to join the rock n roll masses playing classic albums in full. Of course the definitive Lemonheads album is It’s A Shame About Ray – closely followed by Lovey in our opinion.

Australia holds a special place in the heart of Evan Dando with our warm weather, surfing lifestyle and the fact that Australians Tom Morgan and Nic Dalton have both been members of The Lemonheads. It seems the feeling is mutual as he can still sell out the Annandale on a sunday afternoon, primarily playing solo and acoustic.

Support came from locals Ernest Ellis and Bambino Koresh. Ellis is a relative newcomer but impressed with his full six piece band who delivered a tight and well rounded set. Ellis’ voice stood out with its strong falsetto and his contagious way with a melody, strengthened by the backing vocals of the others. ‘Want For Anything’ with its incessant rhythms and TV On The Radio feel was a highlight, as were the more angular americana influenced songs.

Bambino Koresh featured Tom Morgan (Smudge, Godstar) on bass and the commanding presence of singer/guitarist Leticia Nischang who prowled the stage throwing guitar shapes and hair flicks with a refreshing lack of ‘cool’. They opened with two Neil Young covers (Hey Hey, My My and Mellow My Mind) while later they succeeded in giving the full Crazy Horse treatment to George Michael’s Careless Whisper. As a three piece Bambino Koresh have a rolling country rock and power pop sound that has muscle and bite when needed. Nischang and Morgan balance each other in attitude and playing and they should build on the dual vocals that worked so well on songs like What I’m Gonna Do Now.

Evan Dando’s image as a slacker and a lost romantic soul was built more on his social adventures than his music. The origins of The Lemonheads were in the early hardcore punk of Hate Your Friends back in 1987 before he began the transition to the dippy country pop songs that he perfected on the classic It’s A Shame About Ray. Wandering on stage with a battered acoustic and a grin he paused to honour The Saints ‘Stranded’ that was playing over the PA. From there on in it was a mixture of the pure brilliance and the random kookiness that has come to surround Evan Dando.

The set was heavy on favourites, particularly from the It’s A Shame About Ray and Come On Feel The Lemonheads. Songs like Confetti, Rockin Stroll, Rudderless, If I Could Talk I’d Tell You and Outdoor Type all sounded like familiar old friends dropping in for a catch up and a laugh. For the more dedicated fans who bought the Favorite Spanish Dishes EP back in 1991 they were treated to his covers of Skulls (Glen Danzig) and Different Drum (Mike Nesmith) as well as the acoustic version of the sublime Ride With Me. The covers were plentiful through the afternoon with Dando pulling out some Leonard Cohen and Suzanne Vega (Luka).

Dando is solo mode means he feels he needs to carry the weight of the entertainer more than he would or could with a full band behind him. A result of that was his constant playfulness and twisting of the songs through tempo changes, slipping into a cartoon country voice or throwing in random falsetto and baritone growls. One one level his erratic charm worked to keep the mood light but it did at times seem to devalue some of the songs.

Rounding out the set he brought out Morgan and Dalton to tear through a few electric numbers before a couple of other local musician friends replaced them for a couple more. It was a nice touch to embrace the Morgan and Dalton and acknowledge to the local crowd the roll they played in the golden period of The Lemonheads.

One senses that Dando is still playing music purely for the love of it and also maybe because it is all he knows. A covers album Varshons is due out in June, which will further prove his interpretative skills, but tonight proved that no one can argue with his own back catalog no matter how loosely and casually he may play the songs.