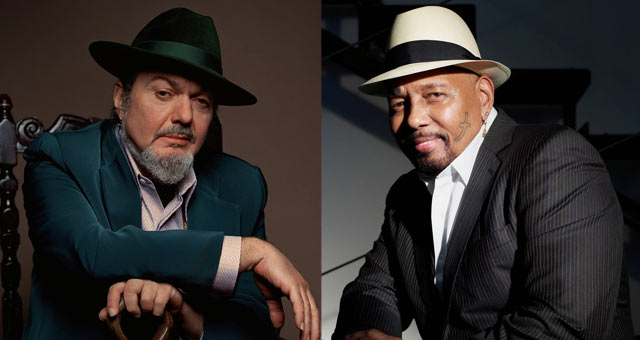 They are both heavyweights of soul, jazz, funk and blues-rooted American music but it was still a surprise to see Dr. John open a show on which he was billed the headliner. He kicked things off with one of his signature songs in Iko Iko, a New Orleans classic, before giving the audience a trip through his back catalogue. Looking somewhat more frail than the voodoo styled Mardi Gras Indian of many of his album covers he occasionally shuffled/sauntered across the stage to play impressive guitar solos but for the most part it was his piano playing that commanded proceedings through Mess Around, Let The Good Times Roll and the highlight of the set in I Walk on Gilded Splinters. His band were accomplished players but it meant we got a fairly sanitised version of Dr. John’s music. It the lacked bayou spookiness of his Gris Gris persona and had a whiff of going-through-the-motions much of the time.

Aaron Neville’s band showed off their impressive musical chops before the singer entered the fray looking a few decades younger than the man who preceded him (they are both 73). His was also a greatest hits set that swung from the sublime to the saccharine with the adult contemporary sound of Don’t Know Much, Everybody Plays the Fool and the medley of soul classics like Stand By Me and Chain Gang a tad staid against devastatingly good renditions of Tell It Like It Is, Summertime and Bill Withers’ Ain’t No Sunshine. Brother Charles Neville was on hand providing sublime saxophone solos throughout, showing that melodic control and sensitivity runs in the family. There was no Hercules, no doubt a big disappointment for many but Neville showed what a magical voice he still has and how effectively he can apply it to a range of timeless classic songs.