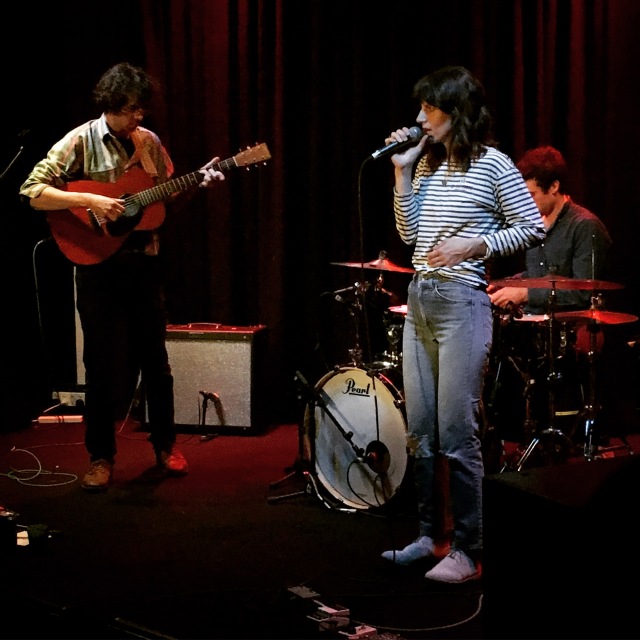 Almost until the moment the headliner stepped on-stage this threatened to be one of those gigs where punters just don’t turn up – for an artist with a relatively established fanbase and on her first solo tour with a band. Thankfully Eleanor Friedberger’s fans crept out of the woodwork at the last minute and, though the venue was only half full, they were a warm and receptive audience.

The late rush did mean that both support acts played to each other, a small coterie of friends and some early arrivals. Georgia Mulligan was playing her first show with a band and it was a fine set with a balanced addition of drums and bass to her smoky, slow-burning songs which always seem to sit right in the pocket and showcased her singular and emotive voice. Noire took things in a postmodern indie pop direction. You can hear shades of Beach House and The xx bathed in a dreamy wash of reverb. They showed a fine range of guitar riffs amid the mostly mid-paced songs but unfortunately the vocals were mixed way to low to really get a handle on Noire as songwriters.

Eleanor Friedberger is now three albums deep in her solo career and that gave her set a rewarding mix of old and new songs plus a Cate Le Bon cover. Between professing her love for Sydney and recalling a week-long bicycle adventure around the city on a previous visit, she delivered song after song with her trademark on-point and quirky turns of phrase, breezy strumming and the occasional jagged interlude. Because I Asked You, Girl With The Curly Hair were two highlights form the recently released New View, as were My Mistakes and I Knew from earlier albums. With her trademark shaggy fringe, worn jeans and a striped shirt she cut a striking figure, somewhere between understated rock star and beat poet – which pretty much sums up her music. It was in intimate performance that reinforced the notion that simplicity in music is sometimes the most effective way to present ones songs and connect with an audience.