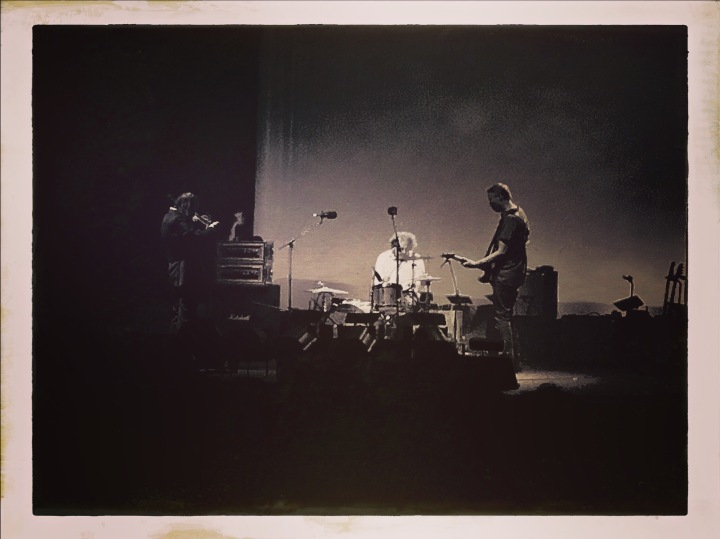 I’d heard great things about Mirel Wagner and she played a good if slightly disconnected set that, for the types of songs she writes (acoustic gothic ballads), lacks an element of menace or otherworldly spookiness to match her visceral lyrics. The talkers in the lobby were a complete distraction too. I can never understand why people shell out close to $90 for a show and then loudly indulge in idle chatter in earshot of an audience trying to lose themselves in intimate music performed by a critically acclaimed songwriter who has travelled all the way from Finland to perform.

Dirty Three are a band that have never let me down with their live performances over the past two decades. Their recorded material on their last few records was very good but it lacked the brilliance of their earlier work. Particularly the classic duo of LPs Horse Stories and Ocean Songs. On stage it is a different story. Mick Turner, Jim White and Warren Ellis are the perfect trio where opposing tension, density and melodies collide and caress one another forming a magical and transportive listening experience. The way they create so much emotion out of a simple, lilting melody and sparse texture on a song like ‘Hope’ and then hurtle into the sonic abyss with the bullet train propulsion of ‘Indian Love Song’.

Warren was the usual madcap raconteur, gracing us with tales of delivering speed at festivals, travelling in semen-infested tour vans, impromptu and anonymous jams with Christy Moore and rejecting a role in Mad Max: Fury Road because he just doesn’t look good in a onesie. All those stories were folded into the introductions of songs, almost as essential a part of the Dirty Three experience as the music itself. It grounds them, connects the wild and febrile spirit of the band to the audience and most importantly it adds humour and irreverence to their performance.

Ellis’ playing is often, rightfully so, the focus of reviewer’s and the audience’s attention as he high-kicks accents within the songs, leaps onto a chair, hugs friends in the front row and throws his shoulders and greying hair back and bellows wordless howls into the lavish deco surrounds of the State Theatre. His violin is a pure extension of his personality… raw, unfettered and hopelessly romantic. He conjured up pain and loss, nihilism and wide-eyed optimism through dissonance, restraint and wild abandon. Without White and Turner by his side the effect would be distilled by two thirds. Their roles are equally as essential to the often overwhelming emotional impact the band creates.

Jim White was the effortless whirling dervish behind the kit, creating polyrhythmic travels through gypsy, jazz, avant-garde, Krautrock and post-rock worlds. The man just doesn’t stop playing – constantly adding tambourines, changing sticks, discarding parts of his kit and only really settling into anything resembling standard rock drumming in sections of ‘Indian Love Song’ and ‘Sue’s Last Ride’. Meanwhile, standing with shoulder to the seated audience, the near stationary Mick Turner is the calm at the centre of the storm, the musical anchor who fills the role of both rhythm guitarist and bassist. His droning chords hung in the staid theatre air, arpeggios were nonchalantly plucked. his majestically sombre playing sounding both ancient and mournful. Losing oneself in each of the player’s sound and styles is the key to full sensory immersion and the ultimate reward of a Dirty Three performance.

Ellis opened up the setlist to requests, paid tribute to Bowie with Ocean Songs’ ‘Authentic Celestial Being’, admitted his emotional feelings of playing with White and Turner again and with one last grand flourish left the stage to a standing ovation. Dirty Three continue to be one of the most honest, emotionally compelling and life-affirming bands I have and will probably ever see perform.