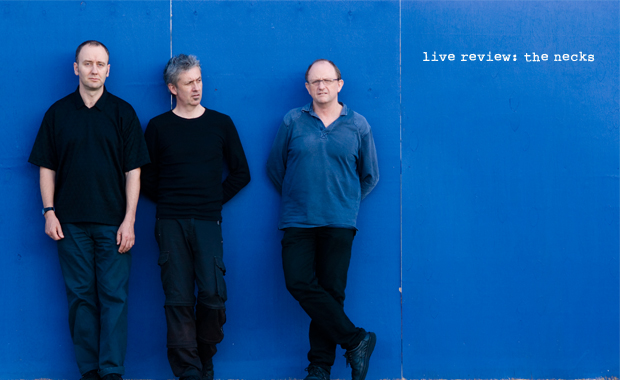 As far as experimental, improvised music goes The Necks are the masters of their craft, never playing the same set twice and composing and creating widescreen, emotionally rich music in the moment. The trio played two hour long sets at The Basement and even though the instrumentation remained the same (piano, drums, bass) the virtuosic talent and imagination of Chris Abrahams, Tony Buck and Lloyd Swanton ensured that they felt like two distinct pieces of music.

After a minute of silence as the trio readied themselves Abrahams initiated the first flurry of notes on the piano that were full and melodic. Swanton absorbed the tonality and sweep of sound before easing his bass into the music while minutes later Buck did the same using low trajectory, rattling snare rolls to unsettle and scrape up against the gentler sounds that preceded him. The pattern of the piece was an evolutionary one that began with a delicate ornate whisper and gradually grew to a sustained squall. The music rose and fell as the players advanced and retreated at different points but the feeling was always of forward movement and auditory travel. Defining moments in both the pieces came when Buck shifted from textural, background percussion that at times sounded like a clanging abandoned ship or creaking machinery to slightly more traditional drum behaviour. The kick drum beat a pulse and toms were incorporated and when combined with Swanton’s bass in the second set the effect was reminiscent of some of the darker, avant-garde electronic music of recent years with dark, vaguely ominous themes. Abrahams’ endlessly inventive work on the keys also impressed. From morse code sounding alien dispatches to rippling and billowing runs of notes he showed both exceptional endurance and imagination. Their music was both intellectual and physical, a immersive full body experience.

this review was first published in The Drum Media / The Music