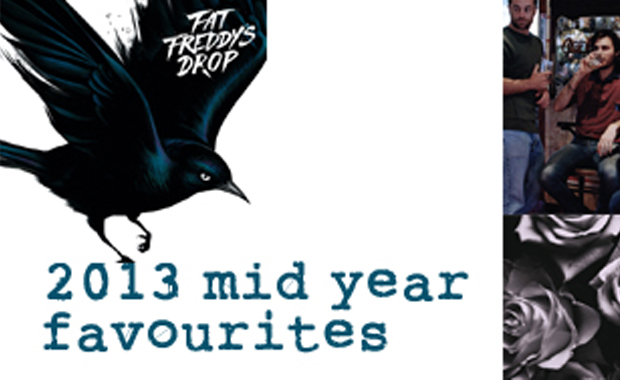 Here we are again at list time, halfway through 2013 and already there have been a swathe of great albums released. We’ve been listening to an eclectic mix of stuff as usual including dub electronica, skronking freeform saxophone, abrasive art rock, retro-leaning post punk and heartstring americana. These are the records we’ve loved the most from what we’ve heard this year. There will be others from the last six months that we’ll discover as the rest of the year rolls out but we can at least highly recommend these ones – in no particular order…

What a magnificent day, I’ll say it from the outset.  From the anticipation on the boat trip out to the island to the vibe of the crowd, the fantastic music on offer and Little Creatures on tap, it was a truly great day and one of the best festivals I have experienced.

Cockatoo Island was the perfect spot to get away from the city for a day.  There was no comparison to the Big Day Out, Homebake or Laneway festivals as this location had space to spare and you could see the effort that had gone into the detail required to make a successful boutique event.

We arrived to see the tail end of The Stabs set which was gregariously abrasive and held together by gaffer tape.

Venturing over to the largest stage named ‘Foundry’ we saw most of Bridezilla‘s performance and though interesting for a song or two it was more a matter of strained style over substance.  Though this was my first time seeing the band, their songs didn’t maintain my attention and the outfits and prancing of the violinist was more amusing than aurally rewarding.

Beaches were up next and after seeing them play at the Hopetoun in December they were on the must see list.  They delivered with a tight set and the rising hazy heat of the day suited their more shoegazing moments as the crowd became a sea of nodding heads.

Heading up to the ‘Barracks’ on the highest point of the island we entered a packed crowd, all impressively silent as Conway Savage played a set of his own material accompanied by guitar and another keyboardist.  The hush of the mainly seated audience combined with the gusty wind, grey skies and mainland backdrop made for a haunting setting for Savage’s ballads of dark humour and pathos.

Afrirampo were the next stop on the timetable and their performance was highly awaited after seeing them at the Oxford Art Factory two nights earlier.  They were a revelation that night and their ATP performance was similarly galvanising.  They awoke the crowd with their Japanese cuteness and musical aggressiveness.  They beat their instruments and wove melodies of words and sound with a dynamic interplay and humour.  Their final song, about their experience dancing with African pygmies, finished with guitarist Oni heading into the audience with a floor tom and inciting a round of percussion and dancing.  A master move and a stellar performance that won them many new fans.

Back to the ‘Barracks’ to see Michael Gira, he of seminal Swans fame, purge his demons with just his voice and guitar.  Hell must be a pretty dark and dismal place and Gira sounds like he has been there and back.  Lyrics about the doom and destruction of the soul, saviour and redemption were delivered with a Johnny Cash bark of gravel.  His voice gave out midway through one song which he apologised for “Sorry, I went from Pavarotti to Kermit the Frog in that song”.

Rolling down the hill after another Little Creatures we just arrived as Harmonia began to play.  These guys include one-time members of Kraftwerk, Neu and Cluster, all seminal Krautrock pioneers.  Their sound was beefier than expected and they provided the first electronic dance moment of the day.  The crowd by now had settled into the festive atmosphere and were happy to let the music move them.  Much respect to Harmonia for they have influenced many more bands over the last 35 years than most people would realise.

Time for the first reformed Australian band of the day and this trip down memory lane for the crowd was Laughing Clowns, the band that Ed Kuepper formed from the dissolution of The Saints.  I was interested to check them out to see how Kuepper evolved from the raw rock of The Saints to the more jazz inflected and exploratory vibe of the Laughing Clowns.  The sax playing was fantastic and the groove was still there.  They provided a great counterpoint to the harder more abrasive sounds of many of the other bands on the bill.

Psarandonis is a Greek musical legend and master of the lyra, a traditional Cretan folk instrument.  Accompanied by his son and Jim White (Dirty Three) on drums they were a breath of fresh air from the electricity filling the island air.  The mood was different and the crowd gave a standing ovation for his instrumental and singing mastery.  It was a musical education for many of the audience who got to hear him.

The first of the really big acts was Spiritualized and the gospel pysch jams and hymnal ballads of ex Spacemen Jason Pierce.  Ably backed by the rest of the band and 2 singers he delivered a set that was balanced and improved from song to song.  He played songs from the seminal Ladies and Gentlemen We Are Floating in Space as well as tracks from the other albums that followed.  ‘Come Together’ in particular was a huge growing beast, all solid and muscular grinding riffs.  Pierce pulled it off and no doubt won over a few skeptics in the process.

A quick attempt to get into the only indoor area (Turbine) to see James Blood Ulmer proved fruitless as the crowd had herded in there already.  There was little chance to see Ulmer but the sounds echoing and buffeting around the massive space were ghostly and ethereal, a bluesy death rattle that was calming after the bombast of Spiritualized.

6.45pm rolled around and this was what a large portion of the crowd had come to witness.  The Saints reformed for a one off show in Brisbane last year and now they were doing a run of shows at ATP.  Legendary, seminal and influential are all words that apply to this band.  They seemed in good form and mood as they took to the stage.  Chris Bailey was lively and looking more youthful than ever.  Ed Kuepper crouched over his guitar slashing out a sound that took many of the audience back to their formative years growing up in Australia.  The biggest cheers were of course for ‘Stranded’ and their last track ‘Know Your Product’ which was the highlight of the set.  Those killer horns provided the catchiest hook of the day.

The time had cometh for the man of the hour.  Nick Cave & The Bad Seeds curated All Tomorrow’s Parties and theirs was without doubt the showstopping performance of the festival.  It was a set that mixed tracks from the recent Dig!!! Lazarus  Dig!!! album with many of his ‘hits’.  Along the way they dug into the back catalogue and played Tupelo, a white lightening version of The Mercy Seat, a sultry and explosive Red Right Hand, a gloriously shambolic Deanna and finished with one of the best versions of Stagger Lee I have witnessed.  Cave was a revelation as he unleashed his demonic preacher sermon with venom and a raw power that left many mouths wide open.  This was their festival and they claimed it with ferocity.

To delay the inevitable slow lines to the dock we returned once more to the ‘Turbine’ to check out Silver Apples, a one man (usually two) act of psychedelic vocals over a bed of prototype bleeps, whirring hums and rhythms that was embraced by the punters still high on some bad seeds.  Silver Apples were the perfect end to the evening as their clean and crisp sound cleansed us of the musical angst and anger of the day and prepared us for the glide back into the metropolis through the dark waters of Sydney harbour.