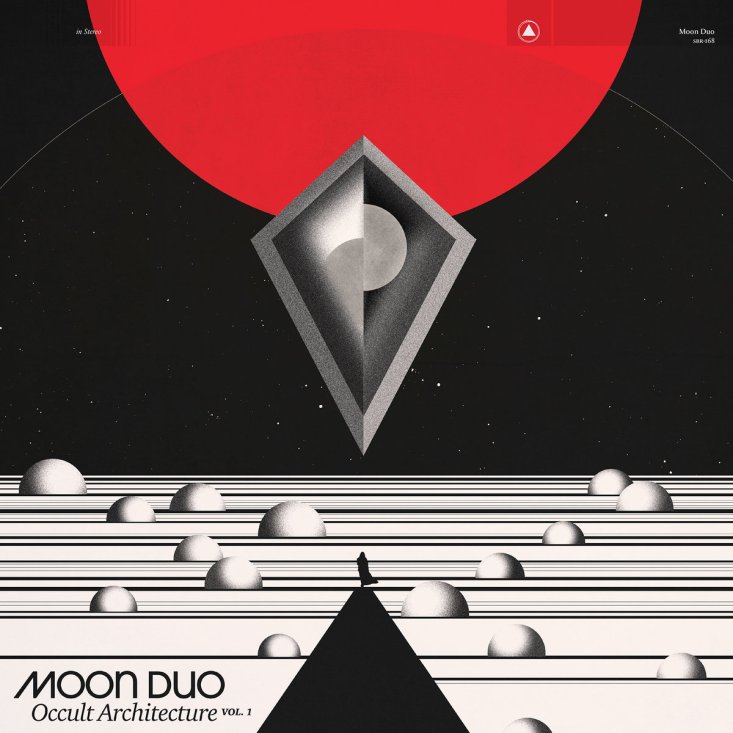 Moon Duo return with the first of two albums they plan to release in 2017, with both volumes rooted in balanced and oppositional ideas and textures. The conceptual approach of the double album is, in their words “an intricately woven hymn to the invisible structures found in the cycle of seasons and the journey of day into night, dark into light.” That Yin Yang format won’t of course make complete sense until Vol. 2 is released later in the year but for now you can be assured that Moon Duo are still doing what they do best – laying down dense, surging and grinding psych rock rhythms.

Their music is always one of perpetual motion and since their first releases, which were dominated by a colder and more mechanical mood, they’ve slowly evolved to find a unique common ground between machine-like repetition, Sanae Yamada’s kosmiche synth washes and melodies and the free-spirited guitar explorations courtesy of Ripley Johnson.

On Occult Architecture Vol. 1, the term primitive futurism keeps coming to mind. The pair conjure up images of mysterious shadowy figures, druids, shamanistic rituals and pagan mysticism with their obfuscated lyrics and general dark tones and textures. They also invoke the spirit of astral travel and space travel, their songs often resembling a object hurtling through space and free of any earthly restraint. There’s a certain cyber quality to the shape and relentless drive of Moon Duo, albeit infused with human emotions – both good and bad.

‘Cold Fear’ induces just that – a queasy feeling of unease which makes it a less aggressive descendent of Suicide’s experiments at putting their audiences in a state of discomfort. ”Cross Town Fade’ is a curious blend of a tranced-out Sigue Sigue Sputnik stuck in a glam boogie vortex while ‘Will Of The Devil’ spins on an axis of insistent drumming with a yearning, melancholic synth melody sounding like a lost transmission from the point where Joy Division became New Order.

The album closer ‘White Rose’ emerges from the dark mist into a more optimistic world, one built on a perfect Krautrock rhythm and Johnson’s guitar sounding like a demonstrative insect buzzing and demanding to be heard. The glorious drone rolls on for ten minutes, onward and upward toward the light and presumably its spring/summer-centric sibling album.

It’s a fascinating journey, with or without the overarching concept, and reinforces the ability of Moon Duo to create music that is both sonically straightjacketed, endlessly immersive and without visible horizons.