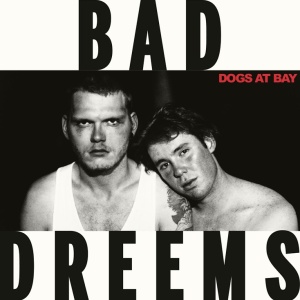 It’s been a slow-build for the Adelaide quartet since they first emerged with the near perfect jangle pop of single Chills in 2012. After the Badlands EP of the following year it was assumed a debut album was imminent yet what followed was a two year wait punctuated by a slow drip feed of sublime singles. Now the highly anticipated full length has finally arrived and it’s all the better for its long gestation. The rawness has been matched by brawn and polished production that enhances the band’s characteristics rather than muting their personality and rough edges.

You can hear the ghosts of melodic rock music coursing through the dozen songs on Dogs At Bay. From The Smiths to Nirvana, The Stooges to The Bats, The Pretenders to The Angels, they cover many bases yet the common thread is the interplay between the chiming, sparkling and riffing melancholic guitar of Alex Cameron, the rhythm section that can switch from primal thunder to post punk angles in a heartbeat and the untethered larrikin howl of a voice that barks, screams and sometimes croons forth from singer Ben Marwe’s lungs. Producer Mark Opitz (INXS, The Angels) has harnessed all these elements and beefed up the sonic qualities considerably from their earlier recordings. It was a gamble of sorts to recruit one of the recording architects of 80s Oz rock, his signature is all over the album, but it works exceptionally well. The songs often sound like lost gems from another time while remaining current with their themes of small towns, disaffected youth and the navigation of today’s cultural landscape.

It must have been hard for the band to pick singles, pretty much any of the twelve tracks would get the nod. ’Bogan Pride’ bristles with an uninhibited urgency and the attention grabbling lyric ‘Big muscles pumping out of my sweatshirt, big muscles pumping in my dreams’. ‘My Only Friend’ counters that with its swaying tale of personal nostalgia while ‘Hiding To Nothing’ hits like an anthem for lost kids facing adulthood.

This feels like an important album, a statement born of experience, countless hours spent in the practice room and driving to shows. It rocks in a primitive fashion and it takes up residency in your short term memory. It sounds like the country and people that it chronicles and it never loses sight of the power of simplicity in rock n roll.

One thought on “ALBUM REVIEW: Bad Dreems – Dogs At Bay”