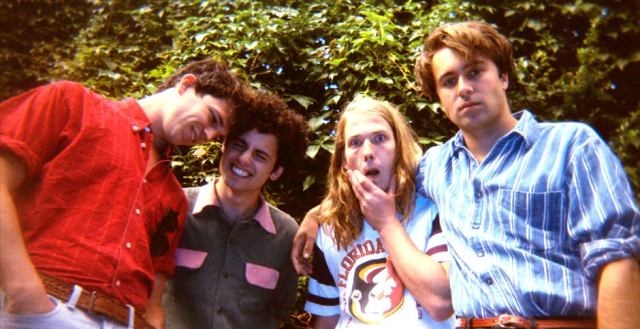 THE VACCINES ARE BARELY A YEAR OLD YET THEY ARE ALREADY TOURING THE WORLD, GAINING KUDOS FOR THEIR DEBUT ALBUM AND UNDERGOING MEDICAL OPERATIONS IN THE NAME OF MUSIC. DRUMMER PETE ROBERTSON TALKS TO CHRIS FAMILTON ABOUT THEIR RAPID ASCENT.

From YouTube to blogs, magazines and TV, The Vaccines seem to be everywhere at the moment and one could be forgiven for some skepticism at their rapid rise to ‘what’s hot’ status, especially for a band that only formed in June last year. The media fuss may stem from a clever marketing push from a major label but for the most part it is backed up by a band that embraces its influences wholeheartedly and delivers punchy, indie guitar rock that references everyone from The Strokes to Interpol and The Ramones with fresh enthusiasm.

Perhaps it is the novelty of a warm and sunny London morning or that drummer Pete Robertson is still riding high on the great reception for his group’s debut album What Did You Expect From The Vaccines?, either way he is in a chatty mood and quick to point out that the positive response to the band in such a short period of time hasn’t taken them by surprise.

“It feels weird answering that question like that as it seems to detract from it as we are having the time of our lives. As individuals we’ve all flirted with various degrees of success in other projects before. As session musicians or in the case of Justin (Young – vocals) who used to be a folk singer/songwriter (Jay Jay Pistolet), we’ve all tried and failed many times before and I think we are used to the record industry and its little idiosyncrasies. It’s kind of weird it is happening to us now but it could just have easily happened to someone else. We were in exactly the right place as individuals for this to really flourish creatively.”

“When you dream of being a musician as a kid you don’t dream of being back up for a solo artist. We were getting a bit sick of it and the dream was dwindling so when we all got together it was complete escapism and it was a complete risk. We were quitting jobs and threw ourselves in at the deep end and that gave it a real sense of excitement.”

The initial spark that led to the formation of The Vaccines came from Young and his desire to move into different forms of music. It just so happened that the others were at similar points in their careers meaning all of them were ready to try something new.

“Justin did the folk thing and felt like he was at the end of that kind of thing and he wasn’t working in the same way as he used to and was looking for something to reignite his spark. The rest of us were doing session gigs and however much fun they were and that it was cool to be able to pay the bills through music it’s not enough. for me it definitely wasn’t enough and for the others it wasn’t doing much for their creativity.”

The Vaccines quickly attracted attention with their live shows and a double A-side release of Wreckin’ Bar and Blow It Up. It wasn’t long before record labels were clambering over each other to sign the Londoners ahead of their debut album. For the type of music they play many would have assumed they’d go with an indie label or self release their own material but surprisingly that route was hardly discussed by the band before they signed on the dotted line with major label Columbia Records.

“We hadn’t thought about it a great deal when we met those guys,” confesses Robertson. ‘We’d chatted with a couple of different record labels and the DIY stuff never really come up and we didn’t really think about it. We didn’t have any resources or money either. A couple of labels reared their heads but Columbia was odd because if we’d thought of anything prior to those decisions we would probably have gone the indie route but when we met them they seemed to just totally get it. They were really supportive and massive music fans and impressive characters and we looked at their roster and it is quite small, it doesn’t feel like a huge roster.”

A band entering the studio to record its debut album can often be at the mercy of an over zealous producer or engineer but luckily for The Vaccines they found a producer willing to collaborate and enhance their already formed songs.

“We were working with a very talented producer called Dan Grech-Marguerat and he made his name as an engineer which is kind of why we wanted to use him. The only thing we were really worried about going into the studio was the sound. The arrangements, the parts, the instrumentation – all of that stuff we’d worked out ourselves beforehand in the rehearsal studio and they were as perfect as we could get them. What Dan brought – in terms of pre-production – was with Freddy (guitarist) spending hours and hours with sound. He really helped it sonically. We went in with a lot of references and ideas about sounds we wanted and he was really good at basically taking that and offering suggestions and it was a really great partnership. The songs themselves were pretty much ready to go before we started though.”

Though the band wears its influences on its sleeve for the majority of the album there is one departure, buried at the tail of the record in the form of a hidden track. It features Young on piano and vocals and sounds like a ghostly afterthought of a song – sad, slow and intimate. Why then did the band hide such a strong song and is it a hint at the future direction of their music?

“That was just one of Justin’s songs and we loved it and thought the only way to get it on the album would be to do it like that as a hidden track. It would have sounded a little bit out of place otherwise. New songs will come out of the writing when we get to it. The songs will always come whatever we do. We haven’t heard or written any yet but some of us might have some up our sleeves. We are ambitious and we want to develop and expand take the challenge ourselves you know,” Robertson explains.

For a band riding in the slipstream of hype the best way to back it all up is with a strong live show. They have already played a ton of gigs in 2011 and are set to embark on a USA tour supporting Arctic Monkeys in May. Ahead of that their activity has unfortunately been curtailed by the need for Young to undergo an operation on his vocal cords.

“We are in a bit of a funny period right now. Justin is having an operation on his throat in the next few days because he’s got a polyp on his vocal cords which means we’ve got to take five weeks off for him to recover. This will be the first time we’ve had off since we started touring in the first week of January so its been pretty crazy and more crazy when we start again in the middle of May. It’s kind of odd because you think a bit of time off would be nice but then you think ‘I’d rather be still out there playing’. We’ve got a few bits and bobs – recording music videos, doing some DJ sets and generally keeping busy. We might start writing, it’s a good opportunity to do some writing for the next record – whenever that may be, we’ll see what happens.”

After the USA tour Robertson confirms they are excited to be heading our way in July to play Splendour In The Grass adding that sideshows for those who can’t get to the festival have already been talked about. “Our tour manager used to live in Sydney promoting gigs so he’s given us the lowdown, it sounds amazing. To be able to go to the other side of the world for your music is really exciting.”

Robertson is keen to stress that The Vaccines are a strong live band, something he attributes to a combined focus on playing well together from the very start of the group’s existence.

When we first started as a band we didn’t have any aspirations or expectations of being able to go and record an album with a major label – we wanted to go out and play a few gigs basically. We spent a few months in the rehearsal studio writing, arranging and perfecting things so we could go out and do gigs and what you hear on the record is pretty much what we did back then and live it is pretty much what we do now. We’ll always learn but we are putting on a good show, we play really well together. Árni Hjörvar (bass) and I have played together for years, we knew each other before The Vaccines and we’d played with each other quite regularly so we click well. It didn’t take long for us to all gel and we put on a good show now.”

For a band riding the ‘flavour of the month’ wave The Vaccines seem healthily ambivalent about the attention without being arrogant. That attitude will hopefully give them some space to develop their promising start into a substantial career with their own unique sound.